Shane van Gisbergen’s rise as one of the quickest and most accomplished drivers in the Southern Hemisphere continues, but the Kiwi’s impressive speed and talent is now fast turning heads ‘up over’ too. 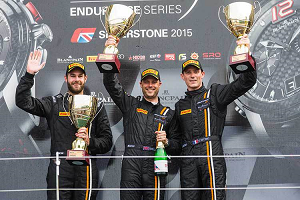 The 26-year-old raced to a career-high second in the V8 Supercars championship last year, and now the multi-faceted talent can add another accolade to his already burgeoning CV after winning in only his second outing as a factory McLaren driver, playing a crucial role in Von Ryan Racing’s emphatic maiden Blancpain Endurance Series victory at Silverstone.

Van Gisbergen raced onto the V8 Supercars scene with Team Kiwi Racing in 2007, his flamboyant style behind the wheel earning him a rather mercurial reputation in the eyes of some, not helped by the shock decision to quit the sport at the end of the 2012 season and a subsequent U-turn just eight weeks later.

Having matured from that raw racer to emerge as a true championship contender, Van Gisbergen’s speed and new-found level headedness mean he is now a man in demand. Landing a deal with British manufacturer McLaren to join its roster of factory GT drivers for 2015 and signing with the V8 Supercar championship’s dominant force, Triple Eight Race Engineering, from 2016 is testament to how far he has come in a short space of time.

That pace and show of sportsmanship were very much in evidence in the race at Silverstone. Having taken over from Rob Bell in the McLaren 650S GT3 under a full course yellow just 45 minutes in, van Gisbergen had to save fuel to compensate for the early pitstop, and all the while maintain the gap from the second placed Audi, before handing over to teammate Kevin Estre to bring it home to the flag.

“It’s awesome!” said the champagne-soaked van Gisbergen. “It was a risky but swell strategy pitting under that safety car. I really had to save fuel to make up a lot of time back on fuel, and it worked out quite well!

“It was planned. We knew what we could do fuel mileage-wise. It came at the earliest point we could pit really, so straightaway I was on a low fuel map and backing off halfway down the straights trying to keep the motor out of the turbo and save as much as I could while still keeping a good lap time.

“It was really tough to try and keep the pace while saving so much fuel. I was backing off almost halfway down the straight and short shifting but I had a pretty good run through the traffic after the first few laps and just did as many laps as I could and pushed to the end. Actually, I managed to save way more than we thought so the last stint was flat out all the way, but my stint was limited by driver time.

“My dad was messaging me as I was in the stint and it’s 4 o’clock in the morning where he is. He’s pretty committed so it’ll be exciting to take the trophy home if the team lets me!”

Since his move to Tekno Autosports in 2013, van Gisbergen is really enjoying his racing again, a change he puts down, in part, to racing selected events outside of his commitments to V8 Supercars. Alongside his impressive eight wins in the 2014 V8 Supercars Championship, a spectacular drive in last year’s Bathurst 12 Hours and finishing second in the GT Daytona class with Alex Job Racing at the famed Daytona 24 Hours proved he has the skill set to mix it with the best.

“Obviously results make you happy, but just getting to experience all different types of things in racing makes you better as a driver and also the way you approach it, it’s good. But even if we come 50th as long as you enjoy it that’s one thing I’ve sort of changed. You don’t have to win every weekend to want to go racing.”

Despite the many racing options outside of V8 Supercars, when asked if there is any anything out there that if offered he just couldn’t refuse, there was no doubt where his heart lies.

“Ah, no, what I’m doing now [Blancpain GT] is cool, but I think the V8s are awesome; that’s what I like to race and always wanted to since I was a kid. These cars are pretty cool too, you’re always going to a limit, and the limit is so much higher into the corners, but then they just don’t go down the straights, and they lack of rawness of driving a V8, which is really cool!

Ironically, those activities that have served to help reignite his enjoyment of racing may need to be cut back next year with Triple Eight’s demanding schedule of off-track media and sponsor commitments.

“That is something I sort of think about. This at the moment is awesome and it’s not taking away from V8 Supercars because it doesn’t hinder myself going back there. For next year there’s a lot more commitments with Triple Eight. I haven’t thought about it too much and I have to speak to them next year about what I do, but I enjoy this racing so I’ll try and do both again.”

Before flying out to England, Tekno Autosports appeared to have misplaced its mojo as van Gisbergen slipped to seventh in the championship after a rough run in Perth and then a strategy error at Winton which saw him finish 23rd place in the Sunday race. Pitting for fuel but not tyres under a mid-race Safety Car, van Gisbergen was back in pit-lane for a third time, just two laps later to rectify the strange decision.

“We were just trying to do tricky stuff in the first round of them,” said van Gisbergen. “We basically just mucked up the strategy. We had a fast car both weekends and we had good results, but then we go and do something silly. You know when everyone does one thing and we try and do something else in one car we’re obviously not going to be right. You’ve got to be the sheep and just go with it and try and do a better job than everyone else. But we’ve learnt from it …twice, so it shouldn’t happen again.”

Part of the problem van Gisbergen says is that the lack of tyres has made life tough for teams and drivers.

“It’s the talk over there – everyone complains, it’s a pretty sad state, but it is what it is, everyone has the same problem… but I come here and get spoilt for tyres, and it’s good!”

Although he’s often said he doesn’t like racing in the wet, with the sky looking overcast ahead of the race, it looked like van Gisbergen’s skills in tricky conditions could be put in to play. He’s said before that he can’t explain what it is that makes him so good in the rain, but finally revealed to us the secret behind his success.

“I know what it is; it’s just knowing how to do it. I’ve grown up sliding but as soon as it rains I’m not smiling. I hate it,” said van Gisbergen, adding with tongue in cheek, “It’s pretty easy to good to look good against Australians because they’re useless in the wet!”

A clash with the SKYCITY Triple Crown event in Darwin means van Gisbergen will miss out on the next Blancpain event in France, before rejoining the Von Ryan Racing team for the Spa 24 Hours in July and another chance to show his talents on the world stage.