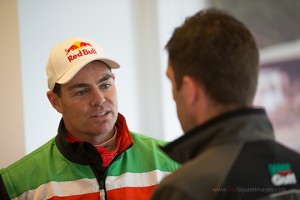 Sometimes you just need to take a break to recharge and refocus, to gain a new perspective and more energy. It may have taken a voyage to the other side of the world, but Craig Lowndes has done exactly that.

Following a disappointing weekend in the Townsville 500, V8 Supercars veteran Lowndes has returned refreshed and ready to get his title challenge back on track, after a fruitful trip to Belgium and an impressive class podium finish in his maiden Total 24 Hours of Spa endurance event. V8SCGlobal.com editor, Andy Champness spoke with Lowndes after the race.

Getting away from V8 Supercars has been more beneficial than staying in Australia and taking part in the recent test day, Lowndes told V8SCGlobal.com. “It is nice just to get out of our little square for a while and experience something like this, because for me it works well, driving cars… driving different cars, definitely helps going back.

“I don’t think it really matters whether it’s a good week or a bad week I’m coming out of, but it’s just about stepping away from V8s and just having a clear head going back into it.

“The team is very good at allowing me to do extra races so that’s a great thing, as long as it doesn’t hinder anything that we do back at home. Hopefully, when I go back home now we’ll get straight back into it, otherwise I’ll be in trouble!”

Together with fellow Australian driver Steve Wyatt and Italians Andrea Piccini and Michele Rugolo, Lowndes steered the #52 AF Corse Ferrari to third place in the event’s Pro-Am class and eighth outright at the revered Spa-Francorchamps circuit in Belgium, no mean feat against such a formidable field.

“We did well with what we had, coming third in our class, it’s a great result,” said Lowndes after the race.

“It’s been an incredible experience to come to Spa and achieve third with the team and although we had a few issues over the course of the race it was a dream come true.”

The result comes just five months after Lowndes’ thrilling Bathurst 12 hour victory earlier this year with Maranello Motorsport. The three-time V8 Supercar champion is eager to capitalise on his growing international acclaim outside the Australian category, although a potential date clash between the 2015 Bathurst 12 Hour and V8 Supercars’ compulsory pre-season test day could prevent Lowndes from defending his title.

“Yeah, the longer races are something I’ve always been very keen on, but it’s just a matter of getting the opportunities to do it. Spa fitted in perfectly with the timing. In Australia we’re in a mid-year break, although we get straight back into our next race next weekend; but the lead in to this one you had a lot more time to be prepared. So I’d like to do more next year.

“We don’t know what our calendar looks like until September, but then once that comes out I’ll have a really good look at how we can adapt to other races through next year; but the one thing I’d like to try and do is Le Mans.

“When I left Australia they were still up in arms about it,” Lowndes said of the Bathurst 12-Hour and V8 Supercars test day scheduling clash.

“I think the two parties were pretty headstrong about leaving it the way it is, so we’re waiting to see what happens. Hopefully a bit of pressure gets put on either one of them to change the date.

“V8 supercars’ test day is scheduled for the Saturday. If we were reprieved for the Sunday’s ‘media day’ which is what they’re calling it, so we can get back to Bathurst and at least do the race, that’ll be something worthwhile doing. I know there are some guys in Audi that I’ve spoken to and some people here that are very interested in what goes on over there and it is just a shame, but we’ll see what unfolds. It’d be a shame if we weren’t able to do the 12 hour.”

Amazingly, despite his enthusiasm for events outside of V8 Supercars, Spa was the first 24 hour race Lowndes has contested and the experience has whetted his appetite for more.

“Twelve hours is the longest I’ve ever been a part of it.

“Learning all about sleep cycles and food and everything else, that’s been one of the biggest things for me to get my head around, trying to programme that, but again it relies on the team to tell me when I’m going to be getting in and out of the car.

“Coming back here for the second time, my first time in a GT3 car [his first was in 1997 competing in the International F3000 championship], I didn’t want to be too ambitious or bite too much off. I now understand the circuit, I understand the 24 hour whole experience.

“Next year I’d like to come back as a pro driver in a pro car and go for an outright win. That’s something, trying to be a bit more sensible about it instead of just coming here and making a fool of myself trying to do too much too early.

“[Before taking the last stint] I did a double stint from 11pm till 3am, another one from 5 to 6 in the morning. I’ve never done a lot of night racing but what I’ve done… I think this was fantastic.

“To be able to have a car that’s got good vision, good lights, be out on your own and just sort of zone out, and have a bit of fun was good!”

“The circuit itself is amazing. For me, it’s one of the top five circuits in the world. You really get a buzz out of every lap, trying to get the most out of you or the car.

“To see the start too, the parade, pushing the cars out on the grid, the marching bands and all that atmosphere is something we don’t really have at home, that was really special.

“The beauty was I knew the car so it was just getting my head round the circuit again. But I learned a lot again this year and I’m still learning, still finding speed out of myself and the cars and the corners. The fast sections I’ve got pretty well nailed against the other guys, but it’s all just the technical side of it, which, like any track, you’ve just got to position the car right and get your head around it a little bit better. I think my lap times were pretty good, especially through the night.”

Lowndes’ attention now turns back to the V8 Supercars Championship. The Coates Hire Ipswich 400 at Queensland Raceway is up next, a circuit he knows well. With 11 victories there, more than twice as many as the next closest driver, he returns to Australia full of confidence and a renewed determination.

“Our next race is at QR, our test track. It’s on the soft tyre too which is great.

“Yeah, Townsville was terrible, but we’re not out of the race yet. We’re nine points off third so we’ll just fight back and see what we end up with.”

With Lowndes over in Europe, his Enduro Cup co-driver Steve Richards sat in for the Red Bull Racing Australia test day, before flying out to Belgium himself to participate in the Spa 24 hour race. The pair caught up over the weekend to discuss the day’s events.

“I’ve spoken to Richo a few times. He filled me in with what went on and everything else which was great.

“He was meant to come over early as well, but then of course we had to come over and do some stuff with Red Bull which we were locked into. He sort of changed his programme and stayed in Australia to do the test.

“To be able to have a co-driver who spends the day in the car is invaluable so it was two-fold – it was great for him to be in the car and also great for us to have him in the car to have the experience and to get his feedback. The team get used to Jamie and myself’s information feedback, so it’s nice to get someone else’s input.

“They did some race runs and got some good information, not necessarily just sheer speed, but I think more consistent speed throughout the race runs which is what we were lacking.

“Touch wood it’s a good omen going into the weekend.”

View the original article on V8SCGlobal.com – Interview with Craig Lowndes “We’re not out of the race yet”