Internationally-renowned sportscar racer, Oliver Gavin has notched up many career highs over the last decade. To his name are four Le Mans 24 Hour class wins and four American Le Mans Series class titles, but becoming the first Englishman to finish on a Bathurst 1000 podium in 16 years was “just amazing” says Gavin. 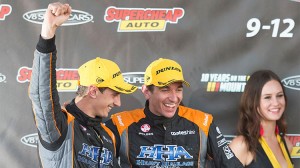 “It was just such a wild ride,” said Gavin who teamed up with 2011 Bathurst winner Nick Percat in the HHA Racing Commodore across the three-event Pirtek Enduro Cup.

“It’s one of those moments I’ll remember for a long time being able to stand on the podium at Bathurst.”

A mainstay of Chevrolet’s Corvette Racing GT squad, Gavin travels the world as works race driver, but the lure of the Bathurst 1000 and racing on The Mountain was a lifelong dream for the 42-year-old.

Gavin had previously raced V8 Supercars as an ‘international’ at the Gold Coast 600 partnering Greg Murphy to sixth and fourth place in the two 300km races, but calendar clashes prevented him from returning to Australia until the Bathurst 12 Hours earlier this year.

Following that event, Gavin was given a run in the Walkinshaw Racing VF Commodore at the V8 Supercars’ official pre-season test day, with managing director Adrian Burgess revealing Gavin’s participation and strong pace in the 12 Hour was instrumental in the decision to bring the Brit onboard for the endurance races.

Switching from the Corvette C7.R sportscar brings with it a new set of challenge, but spending time with Percat helped shorten the learning curve for Gavin.

“Right from the start, being teamed up with Nick has been great,” said Gavin. “He’s been fantastic educating me into my role as a co-driver.

Making his Sandown debut, Gavin finished 15th in the 20-lap co-driver race, although losing three spots after a mid-race clash with fellow Brit Alex Buncombe while running 11th wasn’t part of the plan! Starting the main race Gavin then found himself amongst the action from the off, losing both mirrors and crumpling the bonnet in the opening lap. Unfortunately, contact with a lapped Mercedes left the pair in 22nd at the finish after damage forced them to spend several laps in the pits in the latter stages of the race.

“It was a little bit of a wake-up call doing the co-driver race and seeing everyone else around me and what to expect and how things were going to run,” said Gavin.

“I got a little bit beaten up and moved about and I lost a few spots in some areas where maybe I should have been a bit more elbows out and a little bit tougher. But then when we got to the main race, I was a lot more aggressive. I had my elbows out and made sure I didn’t get pushed around too much.

“It was going pretty well. We would have ended up top six or seven, certainly inside the top 10, but we got turned into the wall by a Mercedes and that finished our day.”

Following the race, Gavin left directly for Texas where he competed in the penultimate round of the Tudor United SportsCar Championship (TUSCC). After a week back in the UK with his family, Gavin’s busy international racing schedule meant another trip to the USA for the final round of the TUSCC, the 10-hour Petit Le Mans classic, before jetting back to Australia for the Bathurst 1000.

In contrast to Sandown, Bathurst was a remarkable result for the HHA Racing duo. After almost eight hours, 10 Safety Car interventions, and an unprecedented red flag stoppage for track surface break-up, Percat and Gavin claimed a dramatic last lap podium finish, snatching third place from Jamie Whincup on the run to the last corner when the reigning V8 Supercars Champion’s fuel gamble came up short.

“Bathurst was just unbelievable,” said Gavin. “It was just such a wild ride. It was crazy the whole week. Everything about it was just amazing and it lived up to everything that I ever thought it was going to.

“Through the race it was just this one turn after another with incidents and accidents, cars going off, track breaking up, red flags, cautions. Nick had this pretty big accident and then, well it’s unusual to have a halftime break in any race, certainly a race the distance of Bathurst, and it was also the fact Bathurst hasn’t been time certain, so it was a long day.

“Nick did an unbelievable job in coping with all kinds of stuff that was thrown at him, whether it was overheating cool-suits, having a problem with helmet air being too hot or disconnected. I remember seeing him under one caution opening the door trying to get air into the car and scraping the dry ice from one side of the cool box to the other trying to somehow fix the car from inside. He did a phenomenal job with that.

“Then the last lap was just one of those things where you just don’t know what’s going to happen next. You’re thinking is Whincup going to run out of fuel? Is Nick going to be able to get past the Mercedes and then is he going to get past Whincup if he does run out of fuel? It was just this nail-biting finish. Then we crossed the line and we were third, it was pretty phenomenal. Just one of those moments I’ll remember for a long time. Standing on the podium at Bathurst being a rookie international, the first time it’s happened in 25 years, that was amazing.” [The last time was 1989 when Frank Biela joined fellow German Klaus Niedzwiedz in an Allan Moffat run Ford Sierra RS500. Gavin also became the first Englishman to finish on a Bathurst 1000 podium since 1998 when Matt Neal teamed with Steve Richards to finish second in that year’s two-litre Super Touring race].

Heading to the Gold Coast on the back of the Bathurst result and with previous experience of the Gold Coast streets under his belt, Gavin and team-mate Percat were confident of another strong outcome. But it was to be a difficult weekend for the HHA Racing duo over the two 300-kilometre races, after a bent steering arm forced a lengthy pit stop in the first bruising 102-lap encounter leaving Percat and Gavin five laps down at the finish in 19th place.

“The Gold Coast was the first time I’d come to a track in a V8 Supercar, where I’ve known the circuit, known the event, so I felt that we stood a really good chance, and on the Saturday we were up there top eight in the top-10 shootout. Nick did great job with that and we were looking really good,” said Gavin.

“On the restart, after the first caution, contact with one of the Nissans bent the steering arm and we go from looking like having a good day to pretty much just making up the numbers.”

The last race on Sunday faired better for the Bathurst podium finishers, but it was not without its challenges. Starting from 16th, Gavin lost time when the team reacted to what turned about to be a ‘phantom’ safety car. The deployment was cancelled but too late for the #222 Commodore and Gavin was forced to double-stack behind the sister Walkinshaw entry. The call to pit came before he had completed his minimum lap requirement and Gavin had to remain in the car, rejoining one lap down in 22nd. Fortunately, Percat was able to get back onto the lead lap and he charged back through the pack to finish 10th.

“On Sunday, there were many little incidents and accidents and stuff going on, and we ended up getting a false call on a safety car,” explained Gavin.

“All of our software was telling us the safety car had come out, so we came in and I double stacked. And it ended up being no safety car, so I’d double-stacked on Green.

“Somehow we stayed on the lead lap, but it meant we were right back at the end of the queue and Nick had to work his way through past those guys and consequently it was just a bit too much for us.

“To get 11th was still quite a good recovery, but you know we both had pace in the car today and I think we genuinely deserved to be top five in both races, but unfortunately it just didn’t quite work out like that.

Pleased with his driving efforts and finishing as the highest placed Walkinshaw car in the Enduro Cup, Gavin hopes for a return next year.

See the original article on V8SCGlobal.com – Interview with Oliver Gavin: “Bathurst lived up to everything that I ever thought it was going to be”