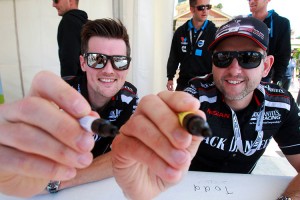 While Nissan’s GT Academy graduates have taken many of the headlines, it is racing mentor and coach Alex Buncombe that has rightly stepped into the spotlight recently with standout drives in the British GT and Blancpain Endurance Series, and now a convincing V8 Supercars debut.

More accustomed to paddle-shift gears, traction control and grippier tyres, the teacher became the pupil as Buncombe got to grips with a very different race craft. But the NISMO Athlete soon mastered the car and the three contrasting, challenging circuits that make up the Pirtek Enduro Cup.

“The whole experience has been unbelievably good,” said Buncombe.

“I honestly think it’s improved me as a racing driver. I learnt a hell of a lot from the team and everyone involved.”

In his first visit to the Mt. Panorama circuit earlier this year, Buncombe’s impressive pace in the Bathurst 12 Hour practice session aboard the Nissan GT-R NISMO GT3, gave those Australian motorsport fans unfamiliar with his name a demonstration of his talent. His lap time of 2m06.598s was nearly one and a half seconds clear of the second placed entry. Unfortunately, a crash at the top of the mountain from co-driver Katsumasa Chiyo cut short the Nissan team’s campaign after three hours and before Buncombe could translate that practice speed into race pace.

A first taste of a V8 Supercar followed in the official pre-season V8 Supercars test day with Buncombe impressing the Nissan Motorsport team enough to get the nod to compete with Todd Kelly aboard the #7 Jack Daniel’s Racing Altima at the Sandown 500, Bathurst 1000 and Gold Coast 600 events. Overtaking 17 cars in the first lap of the Blancpain Endurance Series race at Monza a couple of months later then made everyone really sit up and take notice!

The only debutante in the field of 50 drivers for the opening round at Sandown did not faze the Brit. In his first ever V8 Supercar start, Buncombe claimed tenth place in the co-driver qualifying race. Embroiled in an intense battle throughout, Buncombe crossed the line in the same position Todd Kelly had earlier qualified, impressing everyone up and down the pit lane.

After an early safety car scrambled race strategies, Buncombe then had an extended first spell behind the wheel completing almost half of the main race distance in his two stints, only to find himself double stacked behind the other Jack Daniel’s Nissan in pit lane. Shortly after, Todd Kelly was turned around by Lee Holdsworth, leaving them to finish a disappointing 20th.

Following the race, Buncombe flew back to Europe to race in the Blancpain Endurance Series season finale at the Nürburgring. Dominating the opening stages, the 33-year-old was a sensation in the wet conditions. Up to fourth overall, and class leader in the Pro-Am Cup at the end of the first hour, he took the overall lead after the first round of pitstops for the lead group and held it until his double stint finished at the end of the second hour.

“The [V8 Supercars and GT3] cars are like chalk and cheese; totally, totally different from what I’m used to, so it’s a massive, massive learning curve. You’ve just got to adapt your driving style,” said Buncombe.

“After Sandown, I had to go back to driving a GT3 car. I got back in that and drove extremely well, so I do honestly think it [V8 Supercars] helped me as a driver.”

Having quickly got to grips with the Altima, Buncombe then used his limited Mt. Panorama experience to great effect setting the seventh quickest lap time in the co-driver only practice session.

In the race, he grazed the wall during his first stint, but was able to continue, while team-mate Todd Kelly survived a spin exiting The Chase, courtesy of Jamie Whincup, before crossing the finish line in seventh, his best finish of the season so far.

“It was pretty mega to have finished in the top-ten,” said Buncombe after the race.

“It was a wild race, I’ve never experienced anything quite like that before!”

Looking to build on the Bathurst 1000 result, Buncombe and Kelly headed into the final endurance event of the season, the Castrol Edge Gold Coast 600, hoping to be at the pointy end with the track expected to suit the Nissans.
Unfortunately it was an event to forget for the pair. Starting from 20th in the opening race, Buncombe in his first start on the Surfers Paradise street circuit, found himself caught up in the Greg Murphy/David Russell shunt at the start. Shortly after, the #7 Nissan suffered steering issues, falling just short of completing the necessary laps to be classified as a finisher following repairs. The second race went the same way after Buncombe was hit hard from behind early on. Pushed into the car in front, the team boxed the car to make repairs to the front bar. After losing several laps in the extended stop, Kelly and Buncombe finished 20th.

“The highlight obviously was Bathurst, coming P7 and it was a shame we couldn’t get a result at the Gold Coast, but that’s the way it goes,” a philosophical Buncombe said after the race.

Reflecting on his performance in his first endurance campaign in V8 Supercars, Buncombe added, “I think I’ve done a pretty solid job. It’s very tough to be a co-driver. You’ve got to start the races and there’s a lot of pressure on your shoulders especially around here [Surfers Paradise]. As you know it’s tough, it’s a car breaker.

“It wasn’t our day today, but I hope to be back next season if they want another European driver again, which I hope they do – I’d love to get another opportunity.”

Read the interview on V8SCGlobal.com here: Interview with Alex Buncombe – V8 Supercars “improved me as a racing driver”